UK Car manufacturing has celebrated its highest production output since 1999 after almost 170,000 vehicles rolled out of the nation’s factories during November.

SMMT chief executive, Mike Hawes, said: “These latest results are the product of significant investments made over the past few years, but which will continue only if we can maintain the competitive trading conditions that have enabled the UK to become an automotive success story.”

The SMMT reported that production for the UK market was particularly strong in November, rising 14% to 33,745 units. Exports were up 12.5%.

Hawes said: “Made in Britain is a badge coveted by car buyers worldwide, and these latest figures highlight not just that international appeal but the fact that the UK is a globally competitive place to make cars.” 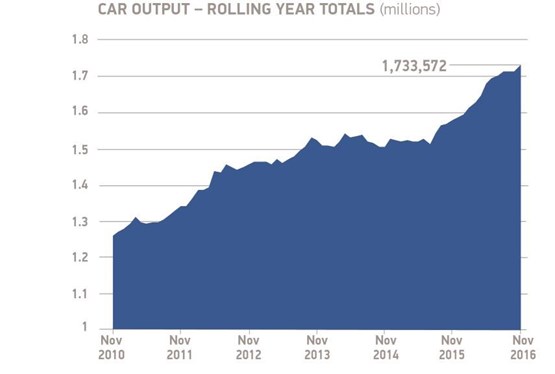