Exports accounted for 79.9% of all production, however, and the industry’s reliance on overseas trade was further emphasised by a 3.6% drop in demand for the home market, with 30,006 cars built for UK buyers. 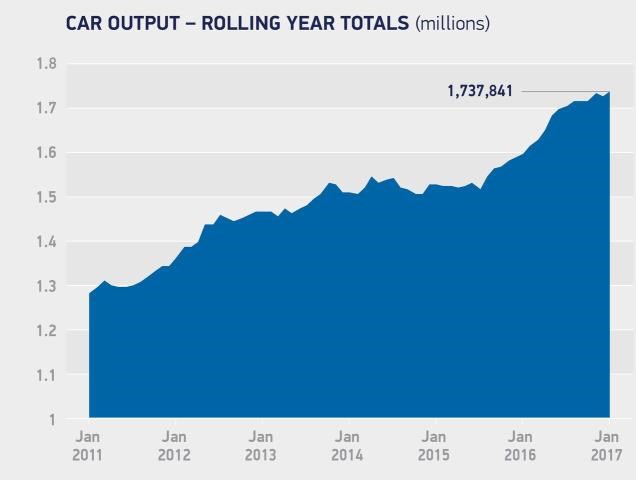 Figures published today by the Society of Motor Manufacturers and Traders revealed that exports had risen by 10.8%, as 117,916 British-built cars were shipped to overseas customers.

Mike Hawes, SMMT Chief Executive, said, “UK car manufacturing made a very positive start to the year, carrying on the strong performance from 2016.

“These latest results highlight, once again, the export-led nature of our industry and the global appeal of our products.

“Future growth will depend upon maintaining our competitiveness, not least in terms of securing a future trade deal with the EU that allows us tariff-free access to our biggest market and the ability to move goods freely, unimpeded by any bureaucratic restrictions.”

Stuart Apperley, Director and Head of UK Automotive at Lloyds Bank Commercial Banking, said: “UK Automotive is very reliant on exports. Europe is still a growth market for us, but with increasing political and economic uncertainty across the region, this could be a watch-out for the sector in the longer-term.

"Locally, we’ll probably see domestic demand ramping up until April, as people clamber to get new models ahead of the Vehicle Excise Duty changes.

“Given the production of the Honda Civic for a global market, ramping up of Nissan’s Infiniti brand and the launch of the new Land Rover Discovery, UK production levels are likely to remain healthy.

"The challenge for the sector remains dealing with uncertainty and the impact that has on investment decisions.

"The possible deal with General Motors and Peugeot owner’s PSA is creating some nervousness, but given the production of the new Astra at the Vauxhall plant, any potential impact of a deal is unlikely to be felt in the short-term.”