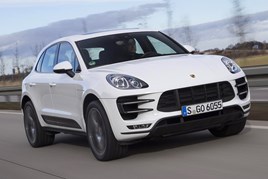 Profits at Porsche soared to record levels to realise operating profits of £3.4 billion as a fall in sales and the dieselgate fallout saw its Volkswagen’s results falter in 2017 – falling 2ppts to £1.7 billion.

Porsche was the success story as Volkswagen Group revealed its annual results at a conference in Wolfsburg this morning.

“In 2016 we set the course for the biggest transformation in the history of the company – while at the same time performing better in our operating business than many thought possible. Volkswagen is back on track,” asserted Matthias Müller, chief executive of Volkswagen Aktiengesellschaft, at the presentation of the 2016 annual financial statements in Wolfsburg.

Volkswagen Group delivered 10.3 million vehicles in 2016 and achieved overall sales revenues of £190.6 billion, exceeding the expected figure by around four billion, according to Frank Witter, member of the board of management, responsible for finance and controlling.

He added: “At EUR 14.6 billion, the operating result before special items also exceeded the previous year’s figure significantly, due particularly to optimized product costs and improvements in the mix.

“We were consequently able to improve our operating return before special items to 6.7 percent.”

Witter said that special items totalling £6.6 billion Euros had affected the operating result in fiscal year 2016, after a total of £14.8 billion in the previous year.

The special items related to dieselgate amounted to £5.6 billion in 2016, mainly due to expenses for legal risks.

In the previous year, expenses related to the diesel crisis amounted to £14.2 billion.

Witter said: “This result demonstrates that the Group is financially equipped to bear the consequences of the diesel crisis. All brands contributed to the success of the Volkswagen Group in 2016 by delivering a positive operating result.”

Skoda’s sales revenues increased by 9.8% in the reporting period to £12 billion.

The operating return on sales rose from the previous year’s 7.3% to 8.7%, meanwhile.

Seat returned to profit in 2016 with an operating result of £134 million, meanwhile, achieving a record sales revenue of £7.8 billion and sales revenue which exceeded the prior-year figure by 3.8%. The Seat brand’s operating return on sales was 1.7%.

The Volkswagen Group expects its group-wide deliveries to rise “moderately” in 2017 to exceed the prior-year volume amid challenging market conditions.

It said that sales revenues of the Volkswagen Group is expected to grow by up to 4% year-on-year in 2017.