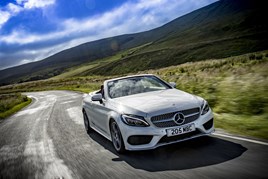 Only the two-litre turbodiesel fitted to the latest E-Class saloon and a V6 turbodiesel in the soon-to-be released S-Class are exempt from the voluntary operation to make Mercedes-Benz’s range cleaner in real-world driving conditions.

All Euro 5 and Euro 6 standard diesel engines registered in Europe between January 2011 and September 2015 are affected.

The £195 million “service action” is the largest manufacturer-led operation to reduce diesel emissions since Volkswagen pulled 11 million vehicles off the road over the so-called dieselgate scandal.

Speaking to AM today, a spokesman for Mercedes-Benz UK, said that there was little similarity with the situation faced by Volkswagen, however. He said: “This is not a recall – something required of Mercedes-Benz by the government and the DVSA – but a pro-active measure to ensure our diesel vehicles are as clean as they can be.

“Mercedes-Benz constantly upgrades its engines and it became apparent that there were improvements in the NOx emissions levels that we could make through a simple software update. That’s what we’re doing, not because we have to, but because we can.

“It’s part of a strategy that we hope will ensure diesel continues to be perceived as a clean fuel that has a long future ahead of it.

“I can’t say conclusively at this stage how many UK vehicles are affected, but will be in excess of several hundred thousand”

The Mercedes-Benz spokesman said that the “software upgrade” would be carried out by dealerships when customers visited for a service or other maintenance work and would take around an hour to complete.

He said that the brand “did not expect” the upgrade to have any effect on the performance of Mercedes-Benz vehicles.

Many Mercedes-Benz diesel vehicles have already had the update applied after work to apply the changes to compact vehilces and the V-Class MPV got underway in March, he added.

The Times newspaper this week reported that while Daimler, which manufactures Mercedes-Benz, had not been found to use the same type of software for cheating emissions tests discovered in Volkswagen vehicles in 2015 it is the subject of an investigation by the German authorities into the possible manipulation of exhaust controls in cars with diesel engines.

Daimler told The Times that it was co-operating with the investigation.

Dieter Zetsche, chairman of Daimler and head of Mercedes-Benz, insisted that the company would continue to make diesel cars. He added: “The public debate about diesel engines is creating uncertainty — especially for our customers. We have therefore decided on additional measures to reassure drivers of diesel cars and to strengthen confidence in diesel technology.

“We are convinced that diesel engines will continue to be a fixed element of the drive-system mix, not least due to their low CO2 emissions.”