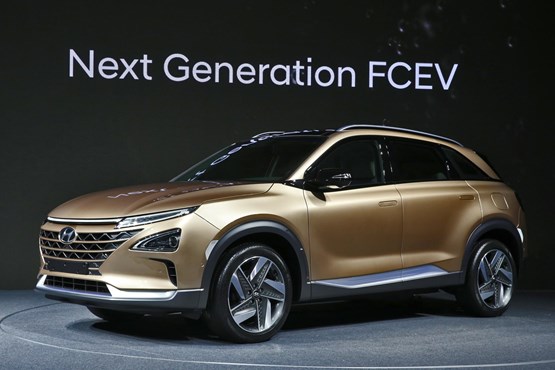 Hyundai has unveiled its next generation fuel cell vehicle, well ahead of the hydrogen-powered SUV’s official launch early next year.

The near-production-ready version is yet-to-be-named but Hyundai says it demonstrates the brand’s commitment to a new era for advanced eco-friendly vehicle development.

It will be the second commercially produced hydrogen model from the brand and uses the Hyundai’s fourth generation of hydrogen fuel cell technology.

The new vehicle promises enhanced fuel economy, thanks to improved fuel cell performance, which should result in a range of 500miles..

Performance is also improved with the new SUV boasting 163PS of power.

Advanced driver assistance technologies will also feature in Hyundai’s hydrogen-powered range. The details of the new ADAS features will be disclosed in January at the 2018 CES, along with the official model name.

Hyundai says the new vehicle embodies pure and serene design, which reflects its calming presence on the road. It also exhibits a confident, charismatic SUV stance, that reflects its capabilities to travel long distances and explore remote places, all while being in harmony with nature.