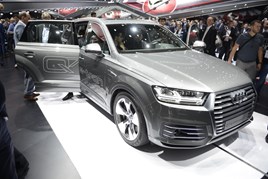 Audi has this morning announced a scrappage scheme offering between £2,000 and £8,000 on trade in of 2010 or older diesel models.

The scheme to remove more polluting cars off the road replaces any part-exchange value for the vehicle being traded in and is not available in conjunction with any other offers. It applies to deals on new EU6 TFSI petrol, TDI diesel or e-tron plug-in hybrid Audi models.

Audi’s scheme follows Ford diesel scrappage offer announced on August 22 and those launched by Hyundai, BMW and Vauxhall since May.

Owners of all diesel-powered passenger cars that comply with EU1 to EU4 emissions legislation and were registered up to and including December 31, 2009 will be able to take advantage of the Audi scrappage incentive.

The offer is conditional upon the new model being purchased in the same name as the car being scrapped, and on the owner having been the registered keeper of that car for at least six months.

The majority of new Audi models can be exchanged on this new-for-old basis, with the exception of Q7 TDI, A8, R8 and RS models.

When compared to existing retail offers, the scrappage incentive equates to an additional contribution of £2,500 on average, said Audi.

In most cases, this support will be higher than the current value of the vehicle being traded in.

Inclusive of the £2,500 OLEV grant also separately available on the A3 Sportback e-tron, the total contribution for this particular model rises to £7,500.

The Audi UK scrappage incentive contributions will be redeemable for orders taken up to and including December 31, 2017 for deliveries made by no later than March 31, 2018.

Customers can fund their purchases using a finance agreement, but the offer cannot be combined with any specific supported Audi Finance promotional rate.

The incentive contributions will be applied automatically when qualifying cars are exchanged without the need for customers to make separate applications.

Audi models in the scheme and incentive support

Further information on the incentive at www.audi.co.uk/scrappage-incentive.