UK car manufacturing showed an increasing reliance on overseas exports as the SMMT announced that production levels had fallen for the first time for eight years during 2017. 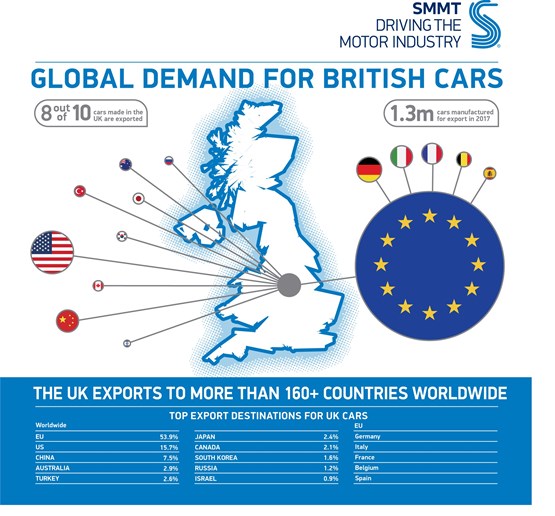 The SMMT said that the latest figures were approximately 130,000 units below its own mid-year forecast as a result of “lower than expected demand primarily in the domestic market”.

Chief executive Mike Hawes said: “The UK automotive industry continues to produce cars that are in strong demand across the world and it’s encouraging to see growth in many markets.

“However, we urgently need clarity on the transitional arrangements for Brexit, arrangements which must retain all the current benefits else around 10% of our exports could be threatened overnight.

“We compete in a global race to produce the best cars and must continue to attract investment to remain competitive. Whilst such investment is often cyclical, the evidence is that it is now stalling so we need rapid progress on trade discussions to safeguard jobs and stimulate future growth.”

Some £1.1 billion of investment earmarked for vehicle and supply chain manufacturing was publicly announced last year, down from £1.66 billion in 2016.

JLR said in a statement that it has invested more than £4 billion on its vehicle and engine plants since 2010, bringing six new models and two Ingenium engines to the market.

However, earlier this month it announced that it would be reducing production of its Discovery Sport and Evoque models at its Halewood plant.

The move paves the way for the likelihood that JLR’s biggest selling model in 2018 will be an import.

JLR’s new E-Pace SUV is being manufactured at the Magna Steyr plant in Austria. 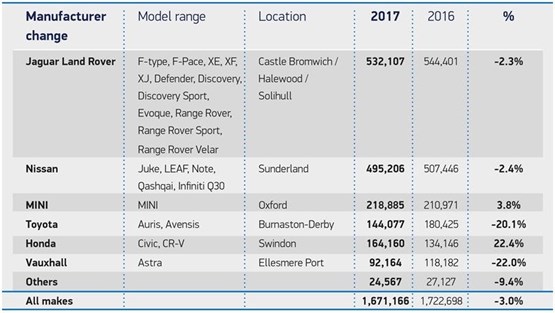 Commenting on the SMMT car manufacturing figures released today, Justin Benson, head of automotive at KPMG in the UK, said that the recent decline in sales should be kept in perspective, having come on the back of "record levels" of car manufacturing over the past few years.

He added: “Brexit is the stand out issue for the automotive sector this year. The industry needs certainty over what the transition period will look like and deeper confidence and detail of how we will trade with the EU in the longer term. Having said that, over 75% of UK manufactured automotive products are exported and overseas markets are growing faster than the UK, including China, US and Europe, so I see UK auto manufacturers continuing to do well in 2018.”