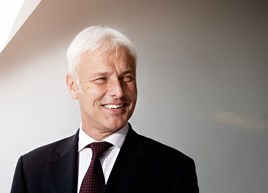 The Volkswagen Group has appointed Dr Herbert Diess as its new chief executive after Matthias Müller stepped down as part of a reorganisation at the top of the German car manufacturer.

Confirming earlier reports of the changes, Volkswagen issued a statement confirming that Diess, previously the group’s head of the VW passenger car brand, would take the helm as part of a series of changes announced last night (April 12.

Müller, who will also relinquish his seat on the board of Porsche, had occupied the chief executive role since taking the post in the wake of the dieselgate scandal in September 2015.

“He assumed the chairmanship of the Board of Management in the fall of 2015 when the Company faced the greatest challenge in its history.

“Not only did he safely navigate Volkswagen through that time; together with his team, he also fundamentally realigned the Group’s strategy, initiated cultural change and, with great personal commitment, made sure that the Volkswagen Group not just stayed on track but is now more robust than ever before. For that, he is due the thanks of the entire Company.”

Volkswagen’s other changes will include the creation of the brand groups Volume, Premium and Super Premium, along with the planned preparation for capital market readiness of Truck & Bus.

The group said that the new divisions “create the basis for a more subsidiary leadership of the Group”.

The Chairmen of the Board of Management responsible for the brand groups will be taking on additional Group management roles, it added.

Following this reorganization, Herbert Diess will be responsible for Group Development and Research, Rupert Stadler for Group Sales, and Oliver Blume for Group Production.

The Supervisory Board also made two new appointments to the Group Board of Management.

Dr Oliver Blume, chairman of the Board of Management at Porsche, becomes part of “the Group’s top governing body” while Gunnar Kilian, who until now has served as Secretary-General of the Volkswagen Group Works Council, has been appointed the new member of the Group Board of Management for Human Resources.

He takes over the post from Dr. Karlheinz Blessing, who served in the role from the beginning of 2016.

Dr. Francisco Javier Garcia Sanz, head of Procurement, leaves the Company at his own request.

Pötsch said: “Matthias Müller has laid the groundwork for our transformation. My most important task will now be to join with our management team and our group workforce in consistently pursuing and pushing forward our evolution into a profitable, world-leading provider of sustainable mobility.

“In a phase of profound upheaval in the automotive industry, it is vital for Volkswagen to pick up speed and make an unmistakable mark in e-mobility, the digitalization of the automobile and transportation as well as new mobility services.”