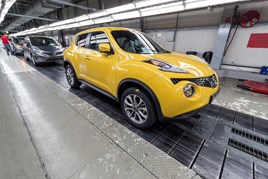 Demand for UK-built cars saw a double-digit decline during March to leave the manufacturing sector’s Q1 output down 6.1%, the Society of Motor Manufacturers and Traders has revealed.

The SMMT once again re-stated their desire to see a frictionless trade agreement struck up with the EU as the sector slumped during the third month of 2018, chief executive Mike Hawes describing the 17.7% reduction in demand at home and 11.9% overseas as cause for "considerable concern".

The results of the month's manufacturing output came within a fortnight of reports that Jaguar Land Rover plan to cut 1,000 temporary jobs in its Solihull and Castle Bromwich plants and Nissan will shed “hundreds” of manufacturing roles at its Sunderland factory. 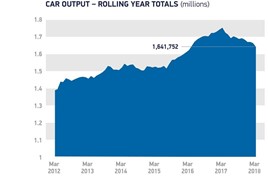 SMMT chief executive, Mike Hawes, said: “A double-digit decline in car manufacturing for both home and overseas markets is of considerable concern.

“Following recent announcements on jobs cutbacks in the sector, it’s vitally important that the industry and consumers receive greater certainty, both about future policies towards diesel and other low emission technologies, and our post-Brexit trading relationships and customs arrangements.

“Maintaining free and frictionless trade is an absolute priority – it has been fundamental to our past success and is key to our future growth.”

In a statement issued alongside March’s manufacturing results, the SMMT also highlighted the wider role played by automotive component manufacturers in the UK.

It said: “Britain’s vehicle and component manufacturers are important contributors to the UK economy and are responsible for 13% of all the country’s export in goods.

“For every one pound generated by the industry, three pounds are delivered to the economy via adjacent sectors such as logistics, retail and finance, with SMMT calculations putting the total economic impact at £219 billion – 10% of UK GDP.”

AM reported on JLR’s plans to cut its temporary workforce a fortnight ago.

The manufacturer said that the move was “temporary”, adding that the changes were necessary due to the “continuing headwinds impacting the car industry”.

Nissan has said that its staffing changes would be “short term” and come as a result of a change to the brand’s drivetrains.

A spokesperson told The Guardian newspaper: “As previously communicated, we are transitioning to a new range of powertrains over the next year.

“As we make the operational changes required to support this, we will be managing a planned short-term reduction in powertrain supply and plant volumes in line with our 2018 business plan.

“We are now discussing these operational changes with our employees.”