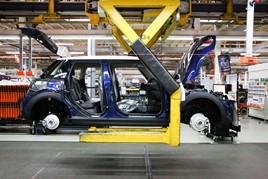 Stephan Freismuth, BMW’s customer manager, has said the pressure from Brexit on the company’s supply chain in Europe could threaten UK production.

In an interview with the FT, Freismuth said: “We always said we can do our best and prepare everything, but if at the end of the day the supply chain will have a stop at the border, then we cannot produce our products in the UK.”

Ian Robertson, special representative of the BMW Group in the UK and due to retire on June 30 this year, said the company would have to make contingency plans within months if the Government didn’t soon clarify its post-Brexit strategy.

Robertson said: "If we don't get clarity in the next couple of months we have to start making those contingency plans, which means making the UK less competitive than it is in a very competitive world right now.

“That is a decisive issue that ultimately could damage this industry.”

BMW employs over 8,000 people in the UK and has previously warned that the company had to remain “flexible” about production post-Brexit.

The warning from BMW follows on from Airbus saying it would be forced to leave the UK if Brexit makes the company uncompetitive.