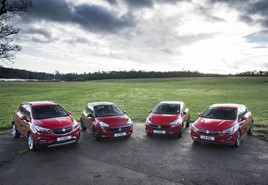 Vauxhall has expanded its special edition Griffin range to include high specification versions of the Mokka X Plus, Astra and Adam.

Vauxhall adopted the Griffin as its logo in 1915. The chief engineer and designer, Laurence H Pomeroy, offered the prize of two guineas for the design of a new symbol. The brief was for a heraldic design and the prize was won by a young apprentice called Harry Varley who proposed the image of a griffin, a mythical creature depicted on the coat of arms of Fulk le Breant,  driving a “V” flag into the ground.

Once the Griffin had been selected, the logo itself proceeded to evolve over the years, with the design becoming progressively simpler and more graphic.