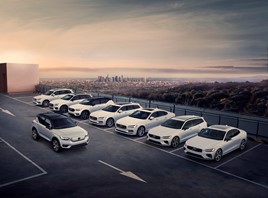 All new Volvo cars are now limited to a maximum speed of 112mph, as part of the manufacturer’s commitment to road safety.

The Swedish brand announced the initiative last year and started limiting vehicles from the beginning of 2020.

As well as the speed cap, every Volvo car will now also come with a Care Key, which allows Volvo drivers to set additional limitations on the car’s top speed, for example before lending their car to other family members or to younger and inexperienced drivers.

The new initiative is similar to the Ford MyKey, which enables owners to set a maximum speed and other restrictions, such as loud the stereo can be turned up.

“We believe that a car maker has a responsibility to help improve traffic safety,” said Malin Ekholm, head of the Volvo Cars Safety Centre. “Our speed limiting technology, and the dialogue that it initiated, fits that thinking. The speed cap and Care Key help people reflect and realise that speeding is dangerous, while also providing extra peace of mind and supporting better driver behaviour.”

The top speed limit has proven to be controversial since it was announced, with some observers questioning the rights of car makers to impose such limitations through available technology.

From 2022, all new cars sold in the UK must be fitted with a speed limiter linked to traffic sign recognition or GPS data, however they can still be overridden by the driver.

The Volvo system has no override, meaning flagship models such as its S60 and S90 T8 twin engine variants may be less desirable when compared to rivals, which are limited to 155mph.

Volvo says that above certain speeds, in-car safety technology and smart infrastructure design are no longer enough to avoid severe injuries and fatalities in the event of an accident, however.