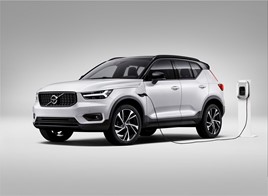 Jato Dynamics believes car manufacturers' actions to reduce average emission levels, by taking certain cars off sale and driving sales of electrified vehicles, is putting them on track to hit targets set by the European Commission.

Its research looked at the data for 21 countries in Europe, and found the average CO2 emissions under the NEDC regime totalled 102.2g/km between January and August 2020.

By these calculations, the European automotive market is currently just 6.5g/km over their combined target for 2020.

Despite overall registrations falling by 29% between January and September this year – when contrasted with the same period in 2019 – registrations for electric vehicles (EVs) increased by 67% through to September to 1.54 million units.

At the start of the year, Europe’s 13 top car manufacturers were predicted to miss their 2021 CO2 emissions targets and face fines of more than €14.5bn (£12.5bn), according to analysis by PA Consulting.

It shows the dramatic change achieved in average emissions in the past year.

In the UK, the Government has set out tough carbon emissions targets for carmakers based on similar regulations to those in the EU from January 1, 2021.

Currently, the European Commission sets an EU fleet average target that must be met by the EU fleet.  For cars, this target is currently 95g/km in 2020. For vans, the target is 147g/km in 2020.

These targets will be converted into WLTP CO2 emissions targets in 2021 following the change in the vehicle CO2 test procedure, and the 2021 actual emissions will represent the new baseline.

Manufacturers will be fined for missing their targets. The new UK rules will mirror those in the EU, including fine an £86 fine for each g/km above the target multiplied by the number of vehicles registered in the year.

AM reported recently that UK market leader Ford is looking for emission 'credits' from other OEMs after its decision to halt Kuga PHEV sales for safety reasons has left it likely to breach the EU targets.

Jato’s analysis shows that in Europe, Geely Group has secured pole position in race for CO2 rankings and smashed its target. Outperforming Toyota – which has traditionally led by brand in the CO2 race – the owner of Volvo (which accounts for 99% of Geely Group’s volume in Europe), Polestar, LEVC and Lotus, met the target by August, four months ahead of the deadline.

A consistent focus on EVs is behind this achievement, with electrified vehicles accounting for almost half of its registrations in August, and 38% in January – August 2020, says Jato.

Toyota seems to be in a good position, only 2.2 grammes away from its target. However, its hybridisation objectives (which started some years ago) are now stalling, claims Jato.

For the past three years, hybrids have accounted for around two third of Toyota’s registrations in Europe, yet they are still not meeting the targets.

Furthermore, Jato says that its pure EVs have also taken a long time to arrive in Europe – with the new Lexus UX 300e, the first fully electric vehicle of the group, finally hitting the market this year.

The strategy of Korea's largest maker, Hyundai, has been to boost its small SUVs and green compact cars, explains Jato. While hybrids accounted for 65% of Toyota Group volume in August, they only made up 13% for Hyundai.

However, pure electric cars represented 8% of registrations for the Korean manufacturer, while Toyota has been unable to put any on sale this year.

Jato says that this perfectly demonstrates how pure EVs are much more strongly placed to meet emissions targets, perhaps more so, than hybrid vehicles.