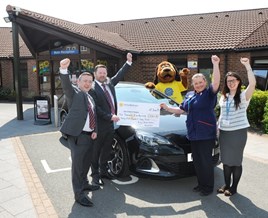 The Brindley Way dealership made a donation for every new car sold and delivered in the months of March and April and hosted an open weekend for the general public.

East Cheshire Hospice provides care for people who are facing challenges at the end of their lives. Offering gold-standard care, compassion, medical and emotional support for people living in the Buxton, Congleton, High Legh, High Peak, Knutsford, Macclesfield, Poynton, Wilmslow and villages and hamlets in between.

General manager at the dealership Christopher Webb said: “The community event was a great success, it was a really great opportunity for us to showcase our great vehicles and also raise money for a very worthwhile cause at the same time.”

Corporate fundraising officer for East Cheshire Hospice Camila Crockett said: “We would like to say a huge thank you to Bristol Street Motors Vauxhall Macclesfield for raising a brilliant £2,545.60. It was a fantastic idea to donate £50 to the Hospice for every car sold during their ‘sellathon’ in March and April, and it is a great example of how a local business can support their local Hospice.

“We would like to thank Chris and David and the whole team at Bristol Street Motors Vauxhall for their support, the money raised will support people in the local community who have been diagnosed with a terminal illness.”

The dealership will continue to donate £50.00 per car to East Cheshire Hospice on every car sold and delivered during August and September.