Was this article useful?
4 people found this useful
3 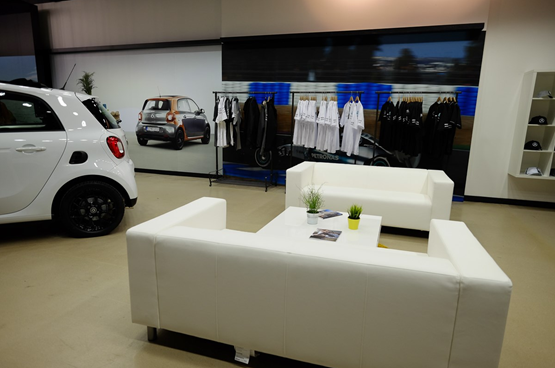 A temporary, pop-up store in a prime location in Birmingham’s Bullring shopping centre has provided lessons in the consumers’ retail expectations for Mercedes-Benz dealers.

Three Mercedes-Benz Retail Group centres in the Midlands combined resources to open a store in a vacant retail unit in the Bullring for one month in May/June manned by showroom staff and displaying four cars as well as branded merchandise, designed to give it a more ‘boutique’ style.

So successful was it that the group plans to open more pop-up shops in Manchester and south London this year - and change the way visitors are communicated with in showrooms.

Staff from the retail group’s Birmingham Central, Solihull and Tamworth centres welcomed 45,831 visitors to the shop – on the ground floor between Selfridges and Debenhams - and with 479 leads (name, address, email address and model interested in) exceeded their target of a 1% conversion rate.

He said: “The benefits of doing business more on customers’ terms in a more relaxed environment were clear. Using iPads, talking beside the cars and deciding not to have desks in the shop made the conversations much more effective. We will be taking these learnings back to the showrooms to influence the way we do business.”

McCullagh also championed the use of ‘product experts’: one was employed in the shop and since it closed last month he has employed a second. “They allow the sales process to be a lot more relaxed and focussed and what the customer’s intentions are rather than the salesperson’s.”

He said it was not yet possible to calculate how many cars had been sold through initial contacts in the shop, but six deals had been done following its closure – and customer feedback had been positive.

“Considering we were given the offer of the shop unit on a Friday, accepted on the Monday and were in six days later during the May bank holiday, shoppers loved the concept. They didn’t expect to see it and said we should be a permanent presence.”

A Mercedes-Benz spokesman said of the further potential use of pop-up shops: “This was an opportunistic and first step towards offering an alternative experience of the brand, in addition to that offered by our network. We’re not yet putting this into a formal programme, however.”

Other Mercedes-Benz Retail pop-up shops have been trialled in Westfield London Shopping Centre and the Drake Circus centre in Plymouth.