Marshall Motor Holdings has seen the levels of staff engagement in the 2015 Great Place to Work (GPTW) survey increase.

In early 2015, Marshall was named by the GPTW Institute as the 26th Best Large Workplace in the UK.

Marshall has been working with the Great Place to Work Institute on its colleague engagement programme since 2008.

Each year all 2,300 staff are invited to participate in the survey to understand levels of engagement across the business.

To the question “Taking everything into account, I would say this is a great place to work” Marshall achieved a score of 83%, up from 80% in 2014.

The benchmark to be considered a ‘great place to work’ is 70%.

The survey also groups questions together in five ‘dimensions’ to determine a ‘trust index’.

The five dimensions are credibility, respect, fairness, pride and camaraderie.

The graph below shows their trend since the start of the survey. 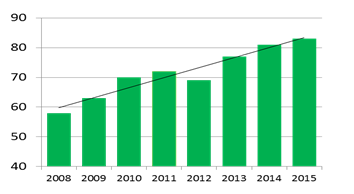 In each of the 5 dimensions Marshall’s scores are above the benchmark of the UK’s best large workplaces: 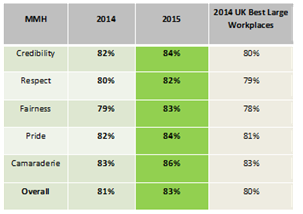 Daksh Gupta, Marshall chief executive, said: “Our 2014 engagement scores were outstanding and saw us named as 26th Best Large Workplace in the UK which is something we are incredibly proud of particularly when you look at some our peer in the rankings, companies such as Capital One, Microsoft, Cisco Systems and SAP to name a few.

“Given what the organisation has gone through this year with the float of the company on the London Stock Exchange, we would have been pleased to have achieved the benchmark score of 70%.

“To have achieved a score of 83%, 3% ahead of last year, with participation levels of 87%, demonstrates the company’s commitment to its people agenda and the massive engagement we have from all colleagues within the organisation.

“We spend a discretionary seven figure sum on our people agenda as we absolutely believe there is a direct correlation between colleague engagement and business performance.

“Everyone in the organisation is delighted with the result and we hope that we will retain or possibly improve our ranking in the GPTW Best Large Workplaces ranking when it is announced early next year.”