Rockar plans more shopping centre stores with Hyundai, in talks with other manufacturers 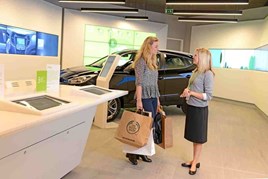 Hyundai is planning to increase the number of its shopping centre stores following a successful launch at Bluewater.

Rockar, which runs the Kent outlet, says it is looking at repeating the success of the venture in the London area with the Korean brand - and has been approached by other manufacturers.

"We are talking to them about further stores too."

He said the second store is planned to open in November. In the meantime, he was also taking calls from other manufacturers looking to copy the idea, with talks in an "advanced stage" with one.

Rockar says it is on track to sell 1,000 cars by the end of the year through its digital focussed retailing process. Visitor numbers to the store are forecast to reach 200,000 in the same period since it opened in November.

A Hyundai spokeswoman said: "We're delighted by how Rockar has been performing. It's now one of the top retail dealers in the UK, on track to achieve our target of 1,000 registrations in the first year, and we are looking at other options and looking to expand the model elsewhere."