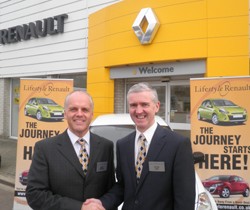 Lifestyle Europe has reported a 20% rise in pre-tax profits in its last financial year.

The car dealer group, which trades as Lifestyle Motor Group from 10 locations across the South East of England, increased profits to £3.7m in the 12 months to the end of March, while turnover rose 8% year-on-year to £157m.

The group will celebrate its 15th trading year in early 2016.

It expanded recently with the opening of a purpose build new Ford and Mazda dealership in Horsham, West Sussex.

Marc Matthew, Lifestyle Europe’s chairman, said the strong foundations laid down since the company’s formation have resulted in a”dedicated, dependable performance” from a strong management focus to agree processes, and the Lifestyle Journey Training strategy.

In February, Lifestyle Europe was awarded the AM Award for Training and Development in recognition of its development of future potential managers.

Matthew said early indications of trading turnover and profit since March 2015 shows performance is ahead of the prior year.