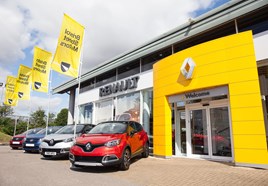 Top 10 AM100 group Vertu Motors has opened its sixth Renault and Dacia dealership with a new Bristol Street Motors location in Mansfield.

It is Vertu’s second new Renault and Dacia dealership in the space of six months. The group’s new Renault outlet in Nottingham opened in March and Bristol Street Motors’ other Renault dealerships are located in Bradford, Derby, Exeter and Gloucester.

Darren Payne, Renault Group UK sales director, said the opening of the latest Vertu dealership is the direct result of the success the dealer group has had with its five other Renault and Dacia dealerships.