Dealers speak out on Volkswagen emissions scandal - AM poll

AM’s recent poll on the Volkswagen emission scandal revealed that 66% of respondents believe it will damage the reputation of Volkswagen Group cars in the UK for the long term.

The poll received almost 600 votes and here are some excerpts from dealers that left anonymous comments when they cast their vote.

While there are plenty calling out the dishonesty involved, some commenters believe the news will blow over.

“While the public are focused on this the current headline there can be no getting away from the irreparable damage to the integrity of the German brands and the trust that people had for VWG.”

“It has caused damaged to a car manufacturer who prides itself on efficiency.”

“It’s very damaging to VW Group and the automotive industry.”

“Thousand of people must have been involved in covering this up. It will be damaging because of the level of dishonesty.”

"VW will put a great deal of effort to rid themselves of the current trouble and so the general public will forget it in say 12 months. Unfortunately the story still seems to run and run. Air bag problems for Toyota and others appears to have been forgotten quite quickly!”

“According to various polls the number one priority for the consumer is trust. If this is correct then yes it will harm the brand unfortunately. However, the general consumer also stated that they wanted organic food if the prices were inline with 'normal' food but they still don't buy the volumes anticipated.”

“VW will need to work hard to rebuild trust.”

“Extrapolating from long personal experience - having owned Polo, Golf, Audi and Skoda in the past 15 years. I will not ever buy or endorse another. Ever. A small but heartfelt retribution.”

“The loss of customer confidence will last a long time.”

“No brand is stronger than it's reputation. Reputation is the brand.”

“Absolutely. You don't lie to customers and get away with it.”

“Reputation is what this is all about. Dealers are getting hung up on the fact that NOx emissions are not a big enough factor in purchase consideration to make a difference, but they're missing the point. “Customers are wary of VW and the fact they have been misled. One thing going in VW's favour is the media and general public's goldfish memory. All we need is for Kanye and Kim to do something stupid and people's attention will be redirected. As it stands, this isn’t dying down.”

"This is terrible news. VW have had such a good worldwide reputation. Everyone in the trade knows VW build great vehicles and they are built to last. This news will eventually fade like the Toyota problem in 2009.”

“I don't believe so, I think we're all shocked by the scandal. However, I still believe in the product and personally I still continue to buy and sell Audi, Volkswagen Seat, and Skoda cars. Customers are still paying good prices. My customers that agree that they feel cheated but none have said as yet that they would not buy another VAG group car.”

“The whole thing has been a storm in a teacup.”

“Only in the short term. As long as they continue to produce quality cars the brand is sustainable.” 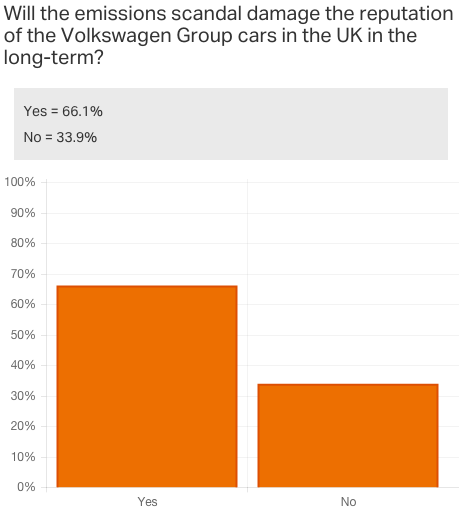