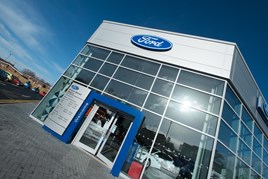 Vertu Motors has reported record profit before tax of £16.4 million from its half year trading period.

Vertu said it now anticipates its full year performance to be ahead of expectations.

Chief executive Robert Forrester said: “The group has a strong balance sheet and net cash position, despite significant capital expenditure and acquisition investment in the period.

“This, together with the operational management strength in the group, gives the board great confidence to keep growing the business, organically and through acquisitions, in the period ahead as the ongoing consideration of the sector continues.”

However Forrester said Vertu’s private new vehicle sales in September were 3.3% below September 2014, despite national SMMT data showing the market for its franchises holding flat. Despite the decline, the group achieved record new car profitability for the month, used vehicle volumes grew 5.4% like-for-like and aftersales was solid, he said.

“I’m actually pleased with where we got to. Pre-registration is a very important part of the market, the manufacturers see it as important channel and we see it as an important channel, but clearly when  that is in expansion there is no way we will be able to hit the SMMT growth rates because we’re measuring two completely different things.

“My personal view is that the world and the industry, be it manufacturers or retailers, would much benefit from private retail registrations as measured by the SMMT to reflect private retail registrations. But clearly it’s up to the SMMT to measure things in the way it wants to measure them. All we can do as an industry is point out it has implications.”

In the six months to August 31, new retail vehicle volumes were up 8.6% overall and 1.2% like-for-like, while fleet new car volumes were 3.6% up overall but 8.5% down like-for-like as the group reduced its low margin short-term rental sales.

Since March Vertu has also ended its relationship with Suzuki and refranchised the site in Mansfield with Renault and Dacia, to complement its existing operations in Nottingham and Derby.

It has also closed its small Peugeot dealership in Ilkeston, and sold its Dunfermline Peugeot outlet, leaving it with seven sites for the French brand, and this month it ceased sales at Cheltenham Alfa Romeo and Bristol Jeep while retaining aftersales operations, leaving it with one dealership selling these brands in Newcastle.

Other network changes include its sale of a freehold satellite Ford dealership in Horwich acquired during its takeover of Gordons of Bolton last year, a purchase of leasehold premises in Exeter to rehome its Hyundai and Renault van operations.