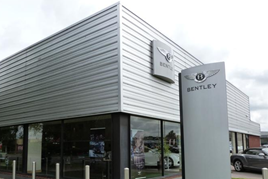 HR Owen Bentley dealership staff have been rewarded for their bravery in tackling a thief who police connected to jewellery raids costing more than £150,000.

The actions of sales manager Stephan Plant and sales executive John Stanton at Bentley Cheltenham, part of HR Owen, helped to lead police to a criminal gang responsible for raids on a jewellery shop, pawnbroker, petrol forecourt cash machine and on the Bentley dealership.

Judge Julian Lambert at Bristol Crown Court detailed how Plant and Stanton reacted when they saw Lee Lovell enter the Bentley Cheltenham showroom on September 29 last year with other masked gang members to try to raid a display cabinet of luxury watches.

One £35,850 watch was stolen, but the car dealership staff managed to prevent Lovell’s escape.

“They restrained him despite struggling violently in an attempt to get away and being assisted by another male trying to pull him out. They then kept hold of him until the arrival of the police.

“Clearly without their courageous and public spirited act he would have made good his escape, possibly with more watches than the one that was stolen,” said Judge Lambert.

He awarded them Sheriff Awards of £250 each for their bravery, reported the Gloucestershire Echo local newspaper.

Lee Lovell, 32, of Newquay Road, Bristol, was jailed for two years at an earlier hearing for his involvement in the burglaries.