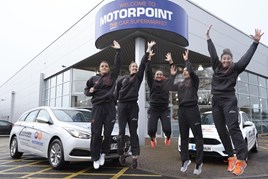 Motorpoint netted a new relationship with a team of high-flying netball players a matter of weeks after opening a new site in the North East.

The car supermarket celebrated the opening of its new site near to the Angel of the North at Birtley, County Durham by sponsoring Team Northumbria, the North East’s only Netball Superleague team.

Sue Vout, sport development and engagement manager at Northumbria University, added: “We are delighted that a company of the calibre of Motorpoint have chosen to partner with Team Northumbria and we look forward to working with them on their activation programme over the coming season.”

Campaigning in both the Netball Performance League and Netball Superleague competitions, both of which run between January and April, the team play home fixtures at Sport Central Arena on the Northumbria University campus and a number of their games will be broadcast live on Sky Sports.

Under the terms of the agreement the Motorpoint logo will feature on both the home and away Netball Superleague dresses while two Motorpoint branded advertising boards will also on show at the Sports Central Arena.

It will also have a dedicated area in the team’s Fan Zone.

Matthew Lewis, general manager of Motorpoint Birtley, said: “We are thrilled to have netted an agreement with Team Northumbria for the 2016 season.

“Netball is growing in popularity all the time in the region and we hope that with our support Netball can become even bigger in the North East.”