Analysis: What the AM200 can teach us about profitability

The automotive retail industry has for a long time focused on scale.

The original AM100 contained only turnover and only slowly progressed to include profit and return on capital and a number of other performance measures.

This review, for the first time, includes groups beyond the AM100.

The table shows the groups ranked from 1 to 200.

We discovered that to enter our expanded AM200 rankings (from 101 onwards) required annual revenues of almost £52 million.

When looking at that expanded data set, the performance tables for profit and operating profit per staff member show an interesting picture.

Of the AM200, the best result for return on sales (RoS), at 5.4%, is Chapel House, ranked 156th. CEM Day is pushed into third place and Arnold Clark into fifth.

Outside the AM200, the top RoS percentage is matched by 213th-placed Mitchell Group.

Arnold Clark is the only representative of the 20 largest groups.

When you include the whole population of the AM200, that figure increases, roughly in proportion.

The average RoS for both populations is about the same, at 1.3%, so the picture is not crystal clear. 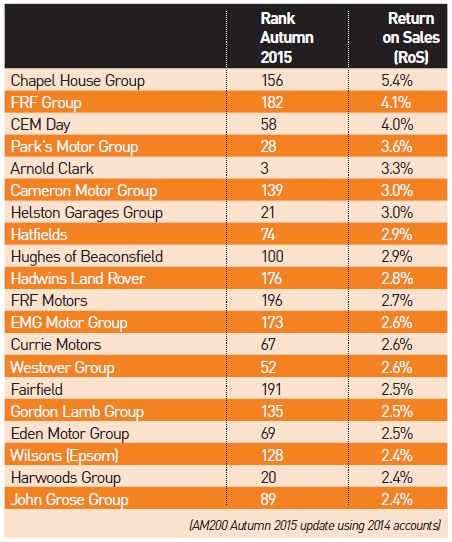 However, it is worth advancing some propositions regarding the significant preponderance of smaller groups in the best of the best. 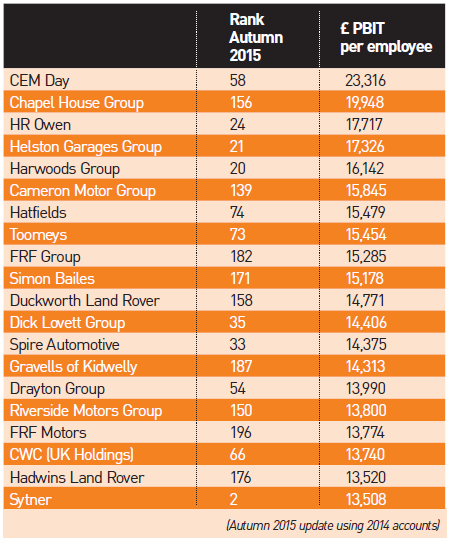 Is scale the way to go?

The pursuit of scale (not just in car retailing) has often been described as a reflection of the hubris or ambition of the chief executive.

It has also been considered (again, not just in car retailing) as a necessity – the City/investors/stakeholders expect it.

The business schools preach it – you cannot succeed by standing still.

In defence of the pursuit of scale, there are potential economies.

Back-office activities need a sizeable operation to serve in order to justify their existence and deliver savings; dealing with a small number of (supplier) relationships at a scale where your voice matters helps deliver results; size equals resilience; and so on.

However, in car retailing those economies seem highly elusive.

The analysis of profitability by scale in this sector has illustrated that over many years.

There have been exceptions – Arnold Clark has consistently shown it is possible to be big and make good money.

But the exceptions are not numerous. However, high-performing smaller businesses are numerous, as the tables show.

The summary accompanying the AM100 data in the previous chapter talks about “wizard plan-ism” aka initiative overload.

It also talks about the position of the customer within the plethora of initiatives.

Perhaps the smaller groups are less vulnerable to this phenomenon. They can hold up their good results and happy customers as good reasons why they should not rush to implement the latest pilot scheme.

There is another area where the smaller groups differ from their larger brethren. It is much more difficult to make an economic case for centralisation.

For example, a call centre seems like a good idea.

You may need an additional half a person per site to take (or make) all the required phone calls, but you can’t employ half a person.

So why not aggregate those half-person requirements and staff up a call centre?

The trouble is that call centres often don’t really work.

Customers don’t like them. The businesses they serve often feel out of touch (who is the call centre’s customer?

The business they make bookings for or the actual customer?).

They encourage buckpassing (‘Why isn’t my workshop on target? The call centre can’t get bookings right, it’s not my problem’).

Even when call centres work reasonably well, the headcount at dealerships often does not reduce as a result.

And business (e.g. retail hours in the workshop; sales enquires handled) and customer satisfaction do not necessarily increase.

The larger businesses would say that taking away the burden of dealing with phone calls allows people at dealerships to specialise.

A service adviser can just deal with customers and solve their problems without having to interrupt the day taking phone calls, many of which are not even related to the service department.

Smaller businesses do not have that luxury, so people have to multi-task.

Staff have to handle customers, take phone calls, solve problems, deal with service and sales enquiries when no-one else is about.

That may seem like chaos. How can you be skilled at every facet of dealership life? Wouldn’t you become a ‘jack of all trades and master of none’?

But many of those smaller businesses manage that conundrum and manage it profitably.

They make a better RoS and deliver more profit per employee. How come?

There has been considerable research into the science of multi-tasking. The age-old idea that women multi-task better than men is actually an irrelevant argument.

Try carrying on a phone conversation (one that requires you to comprehend what the other person is saying) while reading an important email.

You will succeed with one or the other, but not both. Even worse, in trying to do both, you are unlikely to succeed with either.

What we do when multi-tasking is actually serial-task in small chunks.

We pick up one task, do a bit of it, put it down, pick up another and do a bit of that. All that ‘put down and pick up’ activity is waste.

What is needed is a unifying purpose – understanding and process can do that, even if the outsourcing is to its own head office or a good call centre.

However, in a smaller business, where each customer has to be handled on-site and where there is an almost instinctive knowledge of most customers (the same people have dealt with them for years), this is much easier.

The functional boundaries in a smaller business are indistinct (someone has to get it done – if you are the one there when the customer arrives, the buck stops with you).

The attitude becomes one of: “It may get a bit frantic sometimes, but we keep the customers happy.”

I have visited many dealers at all ends of the scale and I don’t actually see any difference in the “frantic” stakes.

There is just as much stress in large dealerships with iron-clad specialisms/silos and a lot of central support.

But there is lower staff and customer satisfaction.

I suspect that if one asked a smaller dealer whether they had the attributes mentioned above – a plan for every customer, a unifying purpose, processes aligned with that purpose – they would say “not specifically by design.

But we are a family business, we know our customers, we are all in it together and that produces the same result.”

How would you scale up this framework?

The first step is to resist the temptation to centralise anything customer-facing. There are obvious candidates for centralisation – systems and accounting, marketing, purchasing, to name a few.

However, even here the temptation to fully centralise should be resisted. Each dealership is a business in its own right, with its own issues.

Any support removed to another location dilutes the effectiveness of that business.

The next step is to accept that it is possible to develop a plan for every customer.

That may seem like (and is) a significant step, but the ratio of customers to staff in any car dealership is low enough for this to be possible.

‘Big data’ is no substitute for individual customer plans

The big supermarkets do this using ‘big data’.

That is because they have to.

The sheer number of customers and the size of the product range make this inevitable, if not necessarily effective. If they could form a relationship with each customer that was two-way and individually managed, they would.

But they can’t, so they resort to big data as their only viable alternative.

In dealerships, the numbers behind a plan for every customer stack up. Let’s propose what should be some silly numbers.

(Silly, because some dealerships do have tens of thousands of customers on their database, regardless of whether they are active or current).

Given 20 working days per month for 10 months, that’s 200 days per person for looking after customers.

That is five customers per person per day we have to spend time on to deliver a plan for every customer.

In a dealership employing 30 people, 15 to 20 of those customers come through our workshop every day.

If we convert to real numbers and also do not expect every single member of the dealership to own a plan, the numbers work out even better.

Most of the big groups, through their own versions of big data, have enormous powers to drill down and see what everyone is doing all the time, interpret trends, set league tables, monitor performance.

But they are not actually “seeing”. They are doing this in a boardroom, using data transmitted by systems, attempting to monitor the performance of hundreds, even thousands of individuals of whom they can have only limited knowledge.

If you are to truly understand what is going on, you have to actually see your employees in the workplace, in real time, in the actual context where the work is taking place.

This can be done. In the smaller groups, this is obvious – the owners or managers are not in a boardroom 50 or 100 miles away.

They are there, in the dealership.

In larger groups, the local management have to act like they are the owner/managers and their staff have to believe they have the authority and responsibility to measure their own performance and propose improvements.

Once that happens, the task of the managers in that boardroom far away is much simpler.

They can look to see if local management are managing improvement. If not, they must go to see why.

This is not theory.

There have been some examples in car retailing.

One of the early adopters of Lean thinking in Portugal, Pedro Simao, used the idea of customer management teams.

Formed from each area of the business, they were charged with formulating and agreeing a plan for and with every customer, which they did to great effect.

There are a very small number of examples in the UK, but again, the results have been worth the effort.

They had to devise a different reward structure and new measurement metrics.

Staff had to think differently about the business.

In particular, the usual functional silos became less important and people thought more about how the whole business could benefit a customer and vice versa.

They had to shift from the old “manage the score” customer satisfaction model and devise their own metric, which took time and is still in its early days.

Just the process of change should represent an advantage, since the industry appears agreed that many of the old formulas do not reward appropriate behaviours and many of the old metrics, even when vigorously driven, don’t produce long-term benefits.

This sort of approach has been practised to great effect by a considerable number of organisations outside car retailing, so it is not new, just better.

> This report is taken from the AM Franchised Dealer Report 2016. It is available to buy in print or pdf in our shop.