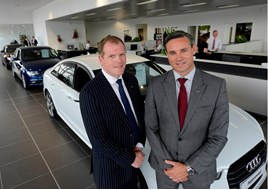 Top 10 AM100 dealer group Lookers is predicting that the new car market may nudge the three-million mark around the end of the decade.

Lookers motor division managing director Nigel McMinn said: “All the demand side says GDP should still grow, and last year pent up demand helped fuel the market growth to 7% against GDP of 2.2%. We think that’s all set to continue for the next few years.”

“We think the market will get close to 3m within the next three to five years. If you look at the 60 year trend, each 15 years the average market of that 15 year period grows by about half a million registrations. We talk about the norm being 2.4m between 2000 and 2015, but in the previous 15 years it would’ve been 1.9, and 1.4 before that.

“Our position has always been that we would see the market recover to pre—recession levels, which of course it did last year, and that the pent up demand from between 2008 and 2013 would allow the market to continue beyond that.

This week Lookers posted record profits and significant organic growth from its motors division of 153 car dealerships. (Click here to read that article)

McMinn (pictured right) said the used car market is also remaining favourable, as registrations growth has fed supply back into market. “Our belief is that there is plenty of demand in the market. Trade values and residual values of retail cars are very robust, probably the strongest I’ve seen them,” he said.

He said driving the growth is continual investment online – “if we're able to display 12,000 cars on 20 different websites the customer is going to see our cars. That helps take share away from dealers who don’t have as many cars in stock and who don’t disperse the visibility of that stock as we do.”

Considerable focus is on renewing PCP customers, in order to drive new car sales growth and generate high quality one-owner cars for the used car forecourt. Lookers PCP retention varies by brand but ranges from 30% to 60% at the top performing sites.

McMinn pointed out that nationally 96% of existing PCP customers now move into a new PCP, whether with the same brand or another marque.