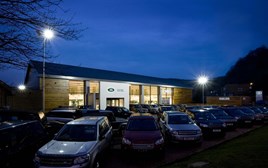 Caffyns is poised to complete the disposal of its Lewes Land Rover dealership to Harwoods a month before its franchise agreement expires.

Details published by the London Stock Exchange revealed that the sale and purchase agreement is scheduled for completion on April 29th for a cash consideration of £5.7 million plus an amount for stock to be established at completion.

Documentation related to the “disposal” stated that the value of vehicle and parts stock in the Land Rover Business at was £3.2 million as of February 29th.

The Stock Exchange Statement said that Caffyns had been informed that its current five year contract with Jaguar Land Rover as an authorised dealer would not be renewed when it expires on May 31st, adding: “The board of the Company therefore believes that the disposal represents the best value for the Company and its shareholders as a whole.”

Caffyns’ Lewes Land Rover dealership was not selected by JLR to be part of the consolidation of its Jaguar and Land Rover franchised dealerships into larger geographic groups.

JLR has decided that a new combined Jaguar and Land Rover dealership should be located in the Brighton and Hove conurbation despite Caffyns’ Land Rover business materially growing profit before tax to over £1 million in the year ended March 31st, 2015.

The Lewes dealership traded profitably in the six months ended September 20th, 2015, and being ranked 38th out of 117 UK dealerships in Land Rover's most recent relative overall performance assessment.

Caffyn’s was able to negotiate the disposal of the business with Hardwoods, the current operator of Brighton’s Jaguar franchise, who were JLR’s preferred franchise operator for the new site in Brighton.

Kendrick said: “The change of ownership taking place within the JLR network has been at levels higher than we have ever seen before.

"Harwoods own the neighbouring Jaguar business therefore the acquisition of the Lewes business fits very well for them and it will no doubt be relocated in the future into the new arch concept joint site.”

Ownership of the freehold property in Lewes, from which the Land Rover Business operates, will remain with Caffyns and will be leased to Harwoods for a period of up to three years from completion subject to a two year tenant only break clause.

Caffyns board is expected to recommend that ordinary shareholders vote in favour of the disposal when a general meetingof the company is held on April 21st.