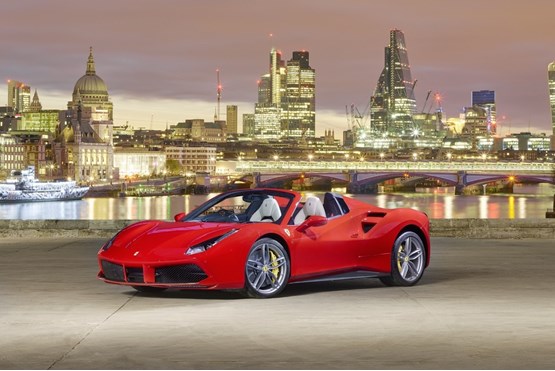 HR Owen has confirmed its involvement in the forthcoming London Motor Show with a line-up of its ultra-premium cars set to make appearances.

Ferrari’s 203mph 488 Spider will sit alongside Lamborghini’s Huracán Spyder, Bentley’s Bentayga SUV, the Maserati Ghibli and Rolls-Royce Dawn convertible will all be part of the London-based supercar specialist’s display at the event

Battersea Evolution will host the show in its inaugural year between May 5th and 8th.

Tom King, marketing director for HR Owen, said: “London and HR Owen go hand-in-hand and we’re proud to have become a very recognisable part of the high-end car market in this amazing city.

“It’s only right that London has a world-class motor show, and we’re very happy to be doing our part by bringing along some of the world’s most exciting cars.”

HR Owen’s award-winning Ferrari dealership in South Kensington – recently crowned the best Ferrari retailer in the world – will be showcasing the Ferrari 670hp 488 Spider, fresh from a recent global unveil at the Geneva Motor Show.

Sitting alongside is the eye-catching Lamborghini Huracán Spyder from Lamborghini London.

Rolls-Royce Motor Cars London will be showcasing the opulent Dawn – only the third drophead model produced by the famous British manufacturer in the last 50 years - while Jack Barclay of Mayfair will be displaying Bentley’s first-ever SUV, the Bentayga.

A Maserati Ghibli, meanwhile, will be provided by HR Owen Maserati in South Kensington.