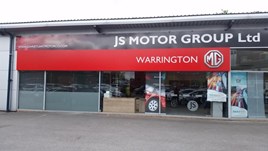 MG Motors made the home of the BBC drama series Ordinary Lies its new home in the north with the official opening of John Stewart Motors’ Warrington dealership.

After a break of around ten years, John Stuart Motor Company has brought MG back to Warrington, Cheshire, last week.

Director James Drinkwater and his team primarily started out selling used cars, until they decided it was time they added a franchise to their business.

And the cars had barely been in before three were sold from the northern dealership, which is also home to the BBC series ‘Ordinary Lies’.

Drinkwater said: “It was a natural progression for us to take on a franchise and we all felt that MG was the perfect fit. The cars are built really well, are fantastic value and give customers the chance to inject some individuality.”

To celebrate the return of MG to Warrington, John Stuart Motor Company is holding a launch event across the weekend of June 3rd, 4th and 5th.

MG Triple Eight racing drivers Josh Cook and Ashley Sutton will be in attendance and Friday night guests will have the opportunity to win tickets to that weekend’s Dunlop MSA British Touring Car Championship round at Oulton Park.

Drinkwater added: “We’re really looking forward to the launch and welcoming old and new faces to the dealership.”

Matthew Cheyne, MG Motors’ head of sales and marketing, said: “This was a really important area for us to fill, so we’re thrilled to welcome John Stuart Motor Company on board.

“The launch event they’re holding is a fantastic way to put them on the map and let customers know, in the surrounding area, that MG is back in Warrington with the latest models.”