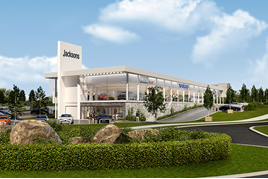 A dozen new vehicle franchises are set to be introduced to potential customers on the Isle of Man after Jacksons were given the go-ahead for a £20 million sales operation.

The Channel Islands-based operation received the green light for the development on a 10-acre site at Cooil Road, Braddan, after an appeal against the scheme was rejected by Richard Ronan MHK, minister for the Department of Environment, Food and Agriculture (DEFA) and independent inspector Michael Hurley.

IoM Today reported that 65 jobs will initially be created by the privately-funded venture – set for development by Isle of Man-based Eden Park Developments – with further expansion plans expected to take the final tally to 100.

Initially, the plan includes the development of two showrooms, an aftersales service building and a valeting building.

Associated changes will also be made to nearby roads, including the creation of a roundabout.

According to IoM Today, planning approval has been refused for approval in principle for a third showroom, a second aftersales sales building and extension for the second showroom, however.

An appeal against the development plans had been lodged by the Isle of Man Development Company, following initial consent by planners to the plans (15/01186/B), but that was rejected earlier this month.

The Isle of Man has a population of around 86,000 people.