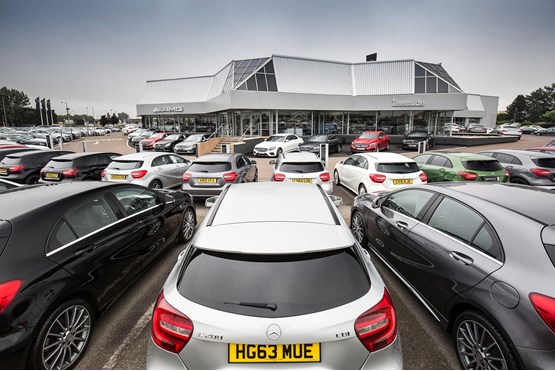 Sytner Group’s Mercedes-Benz Teesside site has celebrated its 25th anniversary with the unveiling of a £1 million new look.

The retailer’s premises in Yarm Road, Stockton-on-Tees, has been officially re-opened following a six-month makeover of the site at an event marked with the unveiling of a plaque by David George, sales director, Mercedes-Benz Passenger Cars UK.

Up to 35 vehicles can now be accommodated at the enlarged site which features the German brand’s latest CI, as well as offering customers the opportunity to relax in a more comfortable lounge area.

Jeremy Simpson, the retailer’s head of business and market area sales director, said: “We’ve created an outstanding, modern retail environment and the reaction from customers has been tremendous with many commenting on how impressive it looks but how welcoming it feels too.

“We set out to strike a balance between a state-of-the-art motor retailing facility that looks sharp and a warm, friendly showroom environment that our customers can feel comfortable in.

“With the initial feedback, I believe we have achieved that and my colleagues and I look forward to welcoming customers old and new to Mercedes-Benz and smart of Teesside.”

Since Mercedes-Benz of Teesside opened in 1991, more than 30,000 new and approved used cars and 2,000 smart cars have been purchased from the site.