Turnover and profits rises for Benfield in Lookers takeover year 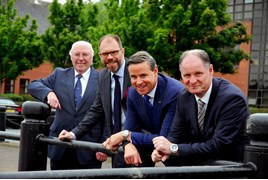 Benfield has seen its turnover rise to £547 million and profits almost treble in the year it was acquired by Lookers in an £87 million deal.

Formerly the North-East’s largest retailer group until last summer’s takeover, the group, legally called Addison Motors, saw the 6.8% increase in turnover and £4 million hike in profits – from £2.2m to £6.2m – in the year ended December 31st.

Included in the profit was £3 million made through the disposal of two Toyota dealerships and a Lexus site and the further disposal of a disused site, which yielded a £1.8 million profit.

He said: “The aim is to grow the business by a combination of organic growth in the existing business, where there are many opportunities for increasing revenue, as well as from targeted and selective acquisitions.”

The number of directors fell from 12 to five following the departure of the Squires family and others from the board, meanwhile, with directors’ combined remuneration falling from £1,240,000 to £894,000.

Commenting on the group’s future strategy, Gregson added: “We strive to deliver sector-leading value whilst providing our customers with market-leading customer service, optimising customer retention and being an outstanding company that achieves our mission of customers for life.”