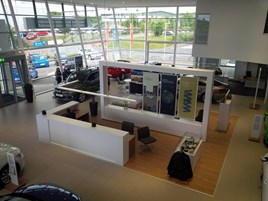 Sytner has completed the £19.6 million acquisition of 11 dealer sites from Clare James Automotive.

The Warrington-based dealer group had boasted franchises including Audi, BMW, Mini, Seat, Skoda and Volkswagen located across the north-west.

A statement issued by CJA confirmed: “CJ Automotive have sold 11 dealerships to Sytner for an undisclosed amount and all of the employees have transferred to Sytner as part of the transaction.

“CJA have retained Skoda Warrington and our TPS operations and these will continue to trade under the Clare James/Lightcliffe banner.”

CJ Automotive, which rebranded its dealerships with its new Lightcliffe trading name back in February 2014, recorded a £220 million turnover and £22 million gross profit in 2014.

Located just off the A55 Expressway, the three-acre site has Audi, Volkswagen, Seat and Skoda franchises as well as Volkswagen Commercial Vehicles.

The group had also bought part of the Pentraeth Group in 2012 and bought Green Bower BMW and Mini in South West Wales in 2008.

Sytner placed second in the recent AM100 rankings, with an annual turnover in 2015 of £3.7 billion and a total of 133 outlets listed across the UK.