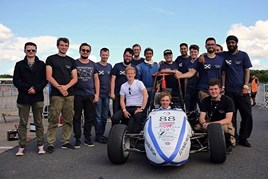 A name synonymous with speed-based challenges returned to the track when Alex F Noble & Sons supported a team of amateur racers from Edinburgh University.

The Midlothian-based car dealership provided the Edinburgh University Formula Student team with a Nissan NV400 Van and a twin-axle car transporter trailer to get them to the Mechanical Engineers’ UK Formula Student competition held at Silverstone.

Organised by the Institution of Mechanical Engineers, the competition is aimed at University engineering students and challenges student-led teams to design, build, test and present a working racing car in competition with over 130 teams from more than 30 countries.

Fahad Iqbal, the team’s Aerodynamics Leader for 2015/15, said: “We were on a very low budget to build our car for less than £3,000. This proved to be a big challenge as we were competing against teams with over fifteen years’ experience and six-figure budgets.

“We wanted to get our name out there and gain more recognition and support from our University and sponsors so I approached Colin Noble, a director of Alex F Noble & Son, as I had previously worked at the dealership on a workshop placement.

“Being a racing driver himself as well as a director of a major car dealership, Colin had great empathy both with our motivation to build a car and also with our desire to develop as mechanical engineers.

“Restricted by a low budget, we would have struggled to get to Silverstone without his company’s help.”

Unfortunately the team from Edinburgh faced unforeseen electronic problems with damaged wiring during the final of six aspects of scrutineering and ran out of time to detect and diagnose the fault.

Despite this they were awarded the Team Spirit Award, and earned a reputation of good sportsmanship towards other teams.