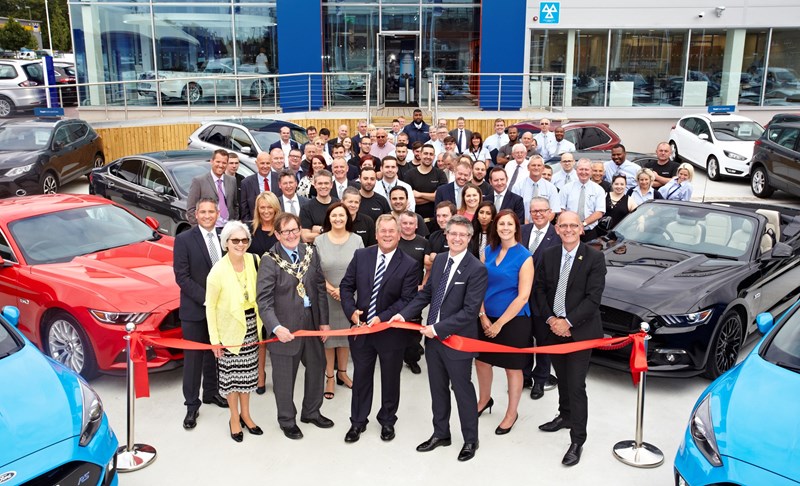 Trustford has officially opened its new £4 million facility in Epsom after a “seamless” shift from its former showroom less than a mile away.

The new facility on Blenheim Road, Epsom, proudly displayed a Ford GT supercar as it welcomed customers and local dignitaries to a special showcase event yesterday.

And Steve Hood, TrustFord’s chairman and chief executive, complimented the sites 50-strong team for their efficient completion of the move from their former site.

Hood told AM: “The team in the workshop literally finished work on the last car one evening and were working on the first service at the new site shortly after 7am the following morning. It was a seamless move over.

“The new FordStore concept that has been inplimented here is a huge step forward. It’s a really welcoming environment for people to come and buy their new car, or just take time to wander around and take a look.”

Hood revealed that Epsom’s dealership is home to one of his network’s rising stars, Mustang sales specialist James Rowe, who has more than 100 sales of the iconic muscle car to his name.

Ford Epsom general manager, Lucy Curtis, said: “We’ve really hit the ground running at the new site and James is a real asset to the place. He’s often mentioned on forums and is very active on social media. It’s the kind of publicity we welcome.”

The Epsom FordStore boasts a display of  the complete range of 22 Ford vehicles – both car and commercial. It also features a further 100 display spaces for used vehicles.

At the heart of the new dealership, and central to the FordStore concept, is an 18 vehicle showroom, featuring dedicated stands, interactive displays, colour walls and a customer seating zone with free Wi-Fi and USB connectivity.

A new workshop has extended opening hours, from 7am to 7pm, designed to allow customers to drop off and collect their vehicles before and after work, and features 17 servicing bays and an MoT bay.

A new Epsom TrustFirstParts operation is across the road from the dealership.

AM Poll
Are you training your staff on commission disclosure ahead of the January FCA changes? Please leave a comment
Vote
View all
1820