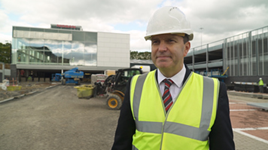 The new dealership on Port Dundas Road, which features an eight-story glass tower, has been under construction for the past 12 months and saw an investment from Macklin Motors’ parent company, Vertu Motors, of over £5 million.

Auld (pictured), general manager of Macklin Motors Glasgow Nissan, will take the helm when the site is officially opened at the beginning of November.

He said: “The new dealership is a fantastic facility and I’m very excited to be moving in with my newly expanded team. Construction has been a year in the making and now that the final touches are being completed you can really get a sense of the scale of the project.

“The dealership’s glass tower is a first for the city and I know that it has got people talking with it being so close to the M8 motorway.”

Auld began his career in the sector as a trainee sales executive and became business manager and sales manager, before taking a franchise manager position for a Mercedes-Benz dealership.