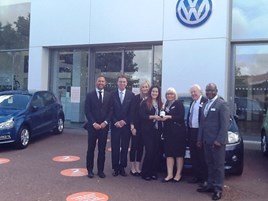 JCB Group has achieved a 16th place listing in a business league table which ranks the 50 fastest-growing, privately-owned businesses in Kent by growth in turnover and staff numbers.

The Gillingham-based group said in a statement that it expects to be catapulted into next year’s AM100 after the impressive result in the annual MegaGrowth 50 awards.

It is the first time that the group has been selected for the MegaGrowth list, so to be placed so highly is recognition of the successful vision of managing director Jonathan Bischoff who founded and still leads the company, it said.

Bischoff said: “Being recognised as a MegaGrowth 50 company is a fantastic accolade. It’s a real achievement to be considered amongst other leading Kent businesses and a testament to the excellence of the staff within this business.

“Throughout my ownership, I’ve been very much centred on developing a regional dealership group which is customer-focused and financially robust.

“Within the past two years we’ve grown our portfolio of franchises in Sussex, now covering Brighton, Crawley, Eastbourne and Worthing which has increased our influence and reach in the automotive world.

“Since JCB Group’s inception, we’ve proven that there’s a healthy market for good old fashioned service in supporting motorists, where people are looked after. Customers are also concentrating their purchases around vehicles which are reliable and offer value-for-money. With this in mind, our strategy of expansion is very much focused around prestigious and forward thinking brands.

“This formula is definitely working and was cemented by the news that the JCB Group moved to 111th place in the AM200 UK dealer listings this year, up 28 places from 2014.

“The JCB Group were the second highest position mover nationally and reported the fifth largest increase in sales nationally.”

Mr Bischoff set up the JCB Group, with the backing of the Volkswagen Group, 19 years ago, then aged 28, while he was working for another dealership.