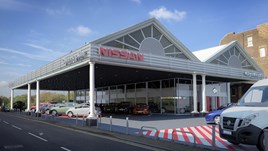 Glyn Hopkin has become the UK’s largest independent retailer of Nissan vehicles with the official opening of its new showroom at Stamford Hill, North London.

The more than 29,000 square-foot facility, which boasts Nissan’s latest retail concept, takes Glyn Hopkin’s permanent Nissan dealership count to 14 sites across the South East, establishing it as the marque’s largest independent dealer group in the UK.

The new showroom took over from a temporary Glyn Hopkin Nissan outlet, that was opened in July, when it opened last week.

“In conjunction with nearby support from our East London, Romford, Buckhurst Hill and Waltham Abbey showrooms, we are taking the right steps to ensuring that customers in the London area always associate the Nissan brand with Glyn Hopkin’s excellent sales and aftersales support.”

Glyn Hopkin said that it has sold more than 15,000 cars and 150 LCVs across its Nissan sites so far this year – equivalent to more than 45 vehicles per day.

Since 1993, when Glyn Hopkin Nissan Romford first opened its doors, the Group has sold more than 116,000 Nissan vehicles.

Glyn Hopkin now has more than 40 showrooms across London and the South East, representing more than 10 brands.