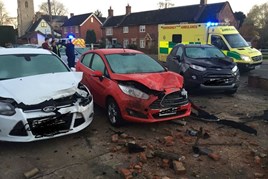 A Ford dealership has been left with a £45,000 repair bill after frosty roads caused a collision which resulted in damage to three cars.

Norfolk –based W.S.Kilbourn & Son, of Mill Road, Hempnall, saw three cars written off in the incident which happened at around 6.30am yesterday morning, according to reports by South Norfolk Police.

The incident happened after a car, driven by a motorist from the village, lost control on the icy road surface and collided with the vehicles before overturning.

No one was injured in the accident.

Speaking to the Eastern Daily Press, W.S Kilbourn & Son owner, Mark Kilbourn, said: “I have been busy all morning cleaning up the mess. We are open as normal.”