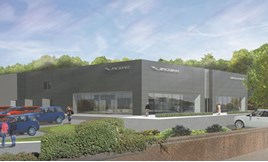 The 18-car dual-brand Arch Concept showroom will be created from what is currently a Wickes store near to the retail group’s current site on Lower High Street.

The new development will feature an 18-bay workshop, MOT bay and valeting facilities and will also see the closure of an existing “rat run” through nearby terrace housing if plans submitted to Watford Borough Council are given the green light.

Planning is being sought for the new JLR facility by Berkeley Square Common Investment Fund (BSCIF), which owns the freehold of the existing Wickes store.

Group 1 Automotive-owned Spire Automotive will take a new lease on the building before the site is substantially refurbished.

A statement issued as part of the application stated: “Spire Automotive was formed following a management buyout in July 2006 of three Audi centres from former owners HR Owen.

Reports compiled on the new facility reveal that it will feature a 2,763sq.m showroom with room to display 18 new vehicles and a separate internal area to accommodate the handover of two vehicles at a time.

Part of the application put forward to Watford Borough Council added: “To the west of the building, there will be a used car sales area accommodating 55 vehicles for sale.

“The site will accommodate 24 customer car parking spaces to the south of the building. Immediately north of the building a further 27 car spaces will be provided for use by the service and MOT team to enable them to make efficient use of the servicing equipment by rotating customer vehicles.”

AM understands that the new Spire Jaguar Land Rover facility will employ around 60 employees, 35 of whom will be associated with sales and the remaining 25 operating in the servicing/parts departments.

Spire Automotive gets its 4th BMW and Mini dealership

Spire Automotive gets its 4th BMW and Mini dealership