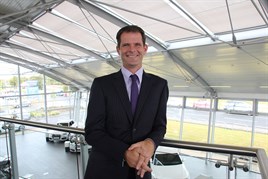 Spire Automotive has taken on its first Jaguar outlet with the purchase of a centre in Watford.

Spire had for many years concentrated on Audi since its founding in 2006 before adding Peugeot and Seat in 2011 and BMW, Mini and Skoda last year.

The new business is in the Spire's Hertfordshire heartland. It has Audi, BMW, Mini and Seat dealerships in the same town.

Watford Jaguar was bought from Mike Dodds, its dealer principal, and Nigel Smith, who had an equal share in the business.

Dodds will remain as DP and all staff are being retained.

Darren Guiver, Spire managing director, said: "It's a well run business. The team are great and it has a positive feel about it. I expect to build on its success and reputation."

Watford Jaguar sells about 300 new and 150 used cars annually. This will not alter markedly this year, but are expected to improve as the model range grows.

Spire has been a Jaguar approved business for some time and introductions were made when the shareholders approached Jaguar to sell.

"Land Rover has had much of the success in JLR to date, but with the new F-Type, XF replacement, a 3 Series competitor and an SUV planned, Jaguar's set to become a bigger player," Guiver said.

On the likelihood of further acquisitions, there are no plans, but Guiver said he would consider opportunities should they arise.

"I'm looking to consolidate what we've got and ensure the new business performs as well as the existing."