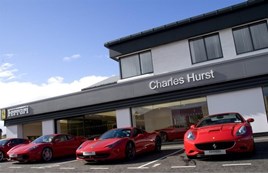 A Ferrari dealership in Northern Ireland is one of many businesses heating their premises from the flawed renewable energy heating scheme which is set to leave Stormont with a £400m bill.

The Belfast Telegraph reported that the Charles Hurst Ferrari showroom on Belfast’s Boucher Road and could potentially benefit from the scheme for the next 20 years.

Under the controversial RHI scheme participants are paid £1.60 for every £1 of eco-efficient wood pellet fuel they use to heat their premises.

The deeply-flawed incentive scheme has prompted a backlash from politicians in Northern Ireland and First Minister, Alrene Foster, narrowly survived a vote of no confidence over the matter earlier this week.

Mrs Foster – who oversaw the RHI scheme’s development during her earlier role as economy minister – has described the matter as “my deepest political regret”.

The Belfast Telegraph reported that there had been no wrongdoing on the part of Charles Hurst in signing up for the scheme, but a company spokesman said that it would “review the scheme and how it applies to our business”.

A spokesperson for Charles Hurst Group told the newspaper that the company had entered into the RHI in good faith and had not intended to disadvantage taxpayers.

A statement said: “Charles Hurst entered into the scheme entirely in good faith and we publicly and specifically outlined our engagement at the time, as well as the environmental benefits which it offered.

“At no stage did we seek to disadvantage taxpayers and we were not in receipt of any knowledge at the time that this might be the case.”