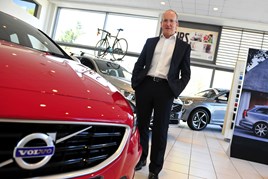 Clive Brook Volvo Ltd is celebrating its most profitable year-to-date after achieving a £40 million turnover in its ninth year of trading.

The group, which added the former Harratts Huddersfield franchise to its existing Bradford site in April 2015 sold over 1,350 cars to achieve the landmark figure.

Clive Brook Volvo managing director, Clive Brook, said: “We have positioned ourselves as ‘The Volvo Experts and the natural choice for everything Volvo in West Yorkshire’ and for good reason following our outstanding 2016 sales achievements.

“Almost every department in the company grew its sales over 2015’s results, with some notable overachievements in aftersales, which averaged a 16% increase year-on-year.

“We're confident this positive drive in growth will continue as Volvo brings more advanced and exciting models to market over the next 12 months.”

Clive Brook's year of growth saw 37 members of staff based at Bradford and 22 at Huddersfield joined by three new recruits exceeded the year’s growth plans, while increasing local market share within the region.

Richard Westerman was recently appointed as general sales manager, bringing a wealth of Volvo and industry experience to oversee the sales operation at Huddersfield.

After a three-month stint in the Bradford office, Sally James will join Westerman and the team at Huddersfield with a view to drive local and regional business sales.

She joins from a Leeds-based leasing company to fulfil the role, understanding the need of prospective companies’ and existing customers’ vehicle requirements.

Having worked for Clive Brook since the start of 2015, Emily Pilmer has been appointed as group database controller, meanwhile, and will ensure all communications to customers are effective and timely. Emily has taken up the position following a move from Huddersfield’s service reception.

Brook added: “On behalf of the company, I’d like to personally thank both staff and customers for their continued support in 2016 as none of what we have achieved would have been possible without them.”