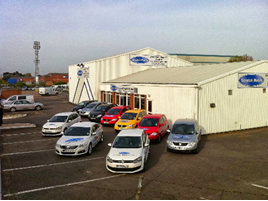 The business, launched nearly 20 years ago, is based at South Humberside Industrial Estate.

It will operate under the name Marshall Paint & Body Repair Centre Grimsby.

Launched in 1998 by Tony Thompson and partner Tina Peacock in premises off Cromwell Road, Scratch Match expanded to the industrial estate in late 2004.

Following Mr Thompson's death in 2006, the business was sold to Pocklington's Renault of Louth. Grimsby used car dealer Jamie Bunten then took it over.

Already an approved repair centre for Volkswagen, Audi, Seat and Skoda, Marshall will add BMW and Mini as work is transferred from its Laceby dealership, with a major redevelopment planned for the site beside the A46.

The showrooms are being expanded with work starting this spring.

A team of 12 has now been brought together at the three-and-a-half acre site, with five existing employees joined by the Marshall bodyshop team and two further recruits.