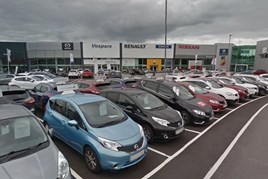 Police have arrested a fifth man in connection to an overnight raid on Vospers’ multi-franchise site in Plymouth following the release of four other suspects without charge.

Thieves stole tools, cash, a safe and two cars from the business at Marsh Hills, Plymouth, after forcing their way in through a back door at some time between the night of January 26 and the morning of January 27.

A Nissan stolen in the raid, which saw offices ransacked, was later found ablaze, while the second vehicle, a black Ford C-max, was discovered abandoned in a dead end track.

The emptied safe was found at a nearby Next store.

Police initially arrested four men on suspicion of committing burglary but the Plymouth Herald has reported that all four will be released without charge.

A fifth man, aged 45 and from Plymouth, has now been arrested on suspicion of burglary at the car showroom, however, and will answer bail on March 22.