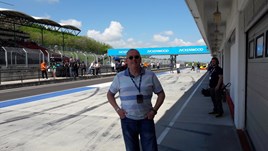 Lovick watched Tiago Monteiro increased his championship lead with a superb victory at the Hungaroring in the ninth-generation Civic Type-R after he was reward for his sales performance with the work-focused trip to Budapest.

“I was ecstatic when I found out I had topped the Civic sales competition”, said Lovick, a sales executive at Greenacre Honda, on Whalley New Road, Blackburn.

“It’s always great to be rewarded for your hard work and a trip abroad to see the WTCC was unbelievable.

“I hadn’t been to Hungary before so I couldn’t wait. Budapest is a truly beautiful city. The Civic is a fantastic car though, so I guess I have to give it some of the credit.”

The all-new, British-built 2017 Honda Civic is made in Swindon and exported world-wide.

UK customers can choose from either a 129PS or 182PS turbo charged petrol engine.