Auto Trader has revealed that the 2016 Mercedes-Benz C-Class was the UK’s fastest selling car in July.

Taking an average of just 17 days to turn in petrol engined guise, the saloon's July performance for dealers marks the second time since Septemeber 2016 that a premium brand has taken the top spot.

The C-Class was followed into second and third place by the 2015 Kia Sportage (petrol manual) and the 2014 Hyundai ix35 (petrol manual) taking a respective 19 days and 20 days to turn.

The list featured nine petrol cars in total and one electric hybrid, the 2012 Lexus RX 450H (electric hybrid automatic), which was the fourth fastest selling car in July taking 20 days to leave the forecourt.

“This includes being more responsive to customer enquiries and of course creating trust through transparency, presenting clear images and videos that reflect the true condition of the car, as well as offering impartial reviews.

“We also know from our research that the most successful retailers are complementing their own expertise with data management tools.

“They’re using data to find the most desirable cars in their area and their using it to price according to the live retail market, offering greater price transparency and building more trust in the process.” 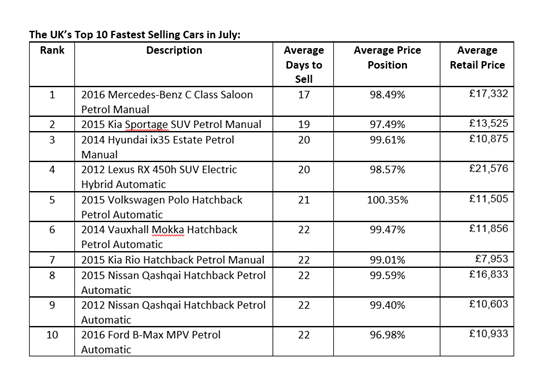