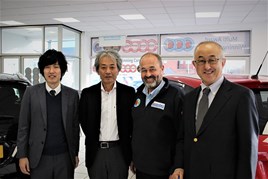 Takanori was on a brief fact-finding visit to Europe from his office in Hammamatsu, Japan, to gather information about the UK market and the future shape of the market, with electric cars high on the agenda.

As Yorkshire-based Luscombe has been involved with Suzuki cars since the early 80’s, he fully understands the DNA of the Suzuki brand, and in just 7 years in his own business, has picked up the award for Suzuki Dealer of the Year three times.

Luscombe said: “Manufacturers have to think so far ahead - as dealers, we plan for maybe three to five years, but manufacturers are thinking 10 to 20 years ahead - so at the moment, with so many changes in the industry, it’s important to give the manufacturer as much information as possible to make those long-term decisions.

"It was great to catch up with Takanori once again and I hope my feedback was useful to him.”

Luscombe Motors Leeds – an AM Best UK Dealerships to Work For

Luscombe Motors Leeds – an AM Best UK Dealerships to Work For