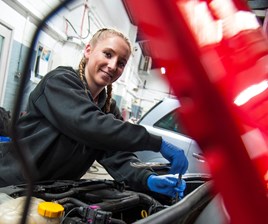 Lookers became the only national motor retailer in the UK to be entered into Centrica’s Top 100 Apprenticeship Employers listings as it was recognised for “making a difference to the lives of their apprentices”.

The AM100 car retail group was among the list of UK businesses which showed the most support to apprentice schemes during 2017 when it was announced at the National Apprenticeship Awards at the Grosvenor House Hotel in London last week.

Designed to showcase the breadth of employers who now offer apprenticeships as part of their recruitment strategies, inclusion in the Centrica Top 100 Apprenticeship Employer follows a “tough selection process”, Lookers revealed in a statement.

Steve Maule, group head of qualifications at Lookers, said: “We are very proud to be named in this prestigious list and to be rubbing shoulders with some of the best apprenticeship employers in the country.

“We’ve worked extremely hard to develop our programme into one that works both for our apprentices, as well as one that covers all of the essential skills that are so critical to the future of motor retail, repair and maintenance.”

Lookers’ inclusion comes after a year which saw the group’s apprenticeship programme’s intake more than double from 78 to 162 last year.

The group, which operates from 157 franchised motor retail outlets across the UK, has also tasked itself with encouraging more women into the motor industry and last year welcomed seven female technical apprentices onto its programme.

Lookers is also utilising the support of other training organisations to improve its apprenticeship programme further and recently became a Silver partner of The Duke of Edinburgh’s Award (DofE).

Sue Husband, director of the National Apprenticeship Service, said: “The Top 100 Apprenticeship Employer list 2017 demonstrates clearly the impact apprentices can have on an organisation. Apprentice employers are creating opportunities for individuals to gain the skills and knowledge needed to succeed, up to degree level, while working and earning.

“These Top 100 Apprenticeship Employers are making a difference to the lives of their apprentices by investing in their future. In return, apprentices are helping employers to develop a skilled, qualified workforce to build a stronger economy.

“I hope the success of these Top 100 Apprenticeship Employers will mean more businesses across England aspire to follow their example and to find out for themselves how apprenticeships help to grow a skilled and highly qualified workforce.”