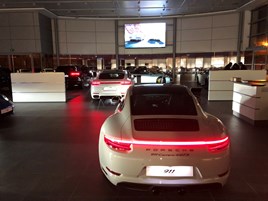 The Porsche Centre on Edgington Way, Sidcup, opened its doors to customers this week following the two-month retail store exercise, which ran from early November to January 7.

Centre principal Chris Butler, who has over 20 years of experience in automotive retail, has no doubts over the value of the Bluewater exercise, which attempted to promote “Porsche Life” to potential customers in the area.

He said: “Porsche prides itself on translating performance into success in the most intelligent way possible, to offer more than just a vehicle. It is an expression of freedom and a unique attitude to life, which is why I am thrilled to be part of this exciting new Centre.

The development of the new facility came as Bowker Group received the green light to create what will be Porsche’s 40th franchised retail outlet in the UK.

Architects Cassidy + Ashton drew up the plans for Bowker’s new Porsche dealership, in Preston, which will feature a 35-car showroom and a 13-bay workshop when it opens its doors later this year.

Porsche enthusiasts can ‘visit’ museum from their home with immersive technology

Porsche enthusiasts can ‘visit’ museum from their home with immersive technology