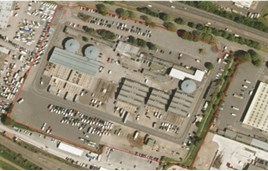 Inchcape is preparing to redevelop Derby’s former cattle market site as a Jaguar Land Rover dealership after acquiring the 11.5-acre site for an undisclosed sum.

The AM100 retail group is expected to start work on the Chequers Road site, which is one mile from the city centre and close to the A52 linking Derby with Nottingham, in Q2, ahead of a summer 2019 opening for the new JLR showrooms.

The sale of the site to Inchcape, for an undisclosed sum, followed a marketing campaign by Cushman and Wakefield, the council’s agent, which generated a number of offers for the site.

Gemma Constantinou from Cushman & Wakefield’s Logistics & Industrial agency team, said: “We are delighted to have agreed the sale of this strategic gateway site which will transform the former cattle market.

“Due to its prominent location we received a high level of interest from a range of purchasers before agreeing the sale to Inchcape within six weeks.”

“This is a great example of how we are investing to create jobs and better serve the people of Derby.”

Speaking to the Derby Telegraph councillor Baggy Shanker, the Derby City Council’s cabinet member for finance and governance, said that he was “delighted” to see the completion of the sale of the former market to Inchcape in a deal which will deliver funds for a new swimming pool complex.

He said: “The capital receipt generated from the sale of this site will support the Council’s capital programme a major element of which is the funding of the construction of a new swimming pool at Moorways.”

The Telegraph said that the city council first announced plans to shut the Cattle Market and demolish the buildings in 2015.

The reason behind the decision was because the site had been running at a loss of around £190,000 a year, with the council having to pick up the shortfall, it reported.